This was the BEST weekend ever! I don't even know where to start, so I guess we'll start with Friday!

My sister lives in Ontario, so clearly I don't get to see her as often as I would like but shes in Calgary for a month! We basically had to fit all our fun into one weekend because it was the only weekend we would get to spend together :( - Side note - 3 days till my flight leaves for Ontario!

Anyone who's seen down to Calgary knows its not all that great when you've spent most of your childhood downtown Toronto. Sure we have the Calgary tower which isn't much to look at if you been to the CN tower ... Anyway she wanted to see the sights so I took her! she was completely unimpressed! - But like I said there isn't much to look at! We took a nice drive around town, and decided to wake up early on Saturday to drive out to see the Rockies!

We left Saturday morning around 8:30am and begun our road trip, first stop Lake Louise. 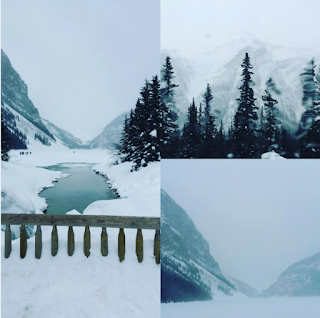 Isn't she beautiful? - The drive up for the most part was good, until we hit white out conditions and I almost lost control of my car! But I was able to correct it with a little coaching from my sister and we were on our way, well after doing 40 for what felt like an hour! - Next on the list was Banff, I'm not sure why but i didn't take any pictures of Banff.  However the view never gets old!

I  SURE LOVE ME SOME MOUNTAINS!!

We got back to Calgary, picked up some chicken and called it a night. Well my sister did, I ended up going to Greg's and kicking it with our homies, well he played League of legend - Seriously, cant believe I'm dating a gamer! -  However everyone who Greg lives with I met before I met Greg so I consider them my friends too! we laughed, we drank, I passed out by 12:30, I'm just way to old to keep up now a days!

Sunday I spent hanging around Greg's until I felt some energy and got a brilliant idea ... take your sister to see more mountains!

We drove out to Elbow Falls which is in the town Bragg Creek. Its literally in the middle of a mountain. You can do a full 360 and the mountain never disappears. My sister probably spun in a circle 4 times well saying this is the most beautiful thing I've ever seen. And it is. Anytime I get a chance to leave the city that's my number #1 go to spot! No service, great views & lots of room for nature walks! 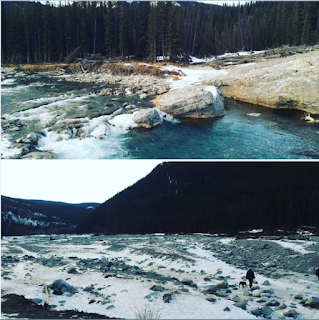 After we got back to the city, we went down town to find this little Caribbean restaurant. Finding it again was a little harder then we thought, but eventually we got to the restaurant and had some delicious Oxtail.

We had the deepest, conversation. A real eye opener about the way we were raised, however that's another story for another day!

Hope y'all had a good weekend!