Friday,
Amy picked me up around noon so that I could do laundry abuse there wifi & pick up hudson after school. I also got to pick up Jacob. Which is always a good time, but his teenage side is really starting to show, when I asked him for help I felt as if I was talking to a flipping wall.. and he's only 13, GREAT! JK, he's a really good kid, just has a bad attitude at times, but I guess its expected at that age. After dinner we all relaxed for a bit, then I drove Jacob to the movies, and then Geoff drove me home after. When I got home I had some drinks and got ready for a friends house warming party, the place looks really cute and well put together! Except the basement, thats a little to creepy for me, after Rob fell down the stairs I decided it just wasnt worth going down the "death trap" anymore .. btw heres Robs back a few days later. 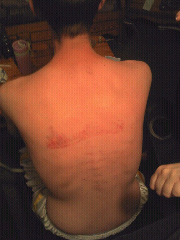 Saturday,
I worked until 6, then after work I went to my aunt & uncles 60th wedding anniversary, arent they they cutest ever! 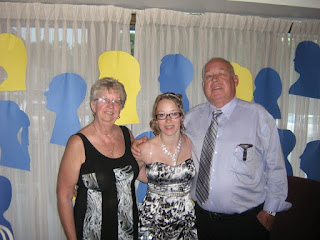 and of corse the cake! 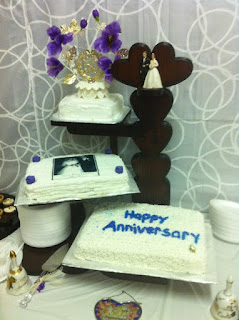 After the party I went back home and continued drinking, may have had a drink or 2 at the party! and a shot, but that was courtesy of my Amy. Farmer; C-plus as he now likes to be called, actually he HATES being called farmer, so I think C-plus is just a upgrade.. Well a little upgrade anyway, but I think he likes it better then farmer. Well any way, after I got home C Plus came over. Since it was Sarah's birthday she also came over with one of her friends, who long story short ignored everyone acted like a douche blamed it on the fact he was sick all day and then bounce. We played a few card games, and then Sarah, my lovely little sarah got us kicked out of the local bar for being to drunk. Which she was infact she was EXTREAMLY INTOXICATED, with good reason it was her birthday, I just wish she had of listen to us and continued to drink at my place were we were all partying for her birthday away. So about 10 mins of being in the bar Cplus, Tabby Sarah & I left. Came back to my place continued drinking, well everyone else did, thankfully at that point Sarah had stopped. After she left we stayed up a few more hours till about 4 then we all went to bed.

Sunday,
I layed in bed almost all day, it was great. I just love my bed! Around 3 Cplus headed home, and I started getting ready for the day. I stopped in for a bit at my friend M's place. Then randomly walked around town since it was SO BEAUTIFUL out! +17, yeah buddy! When I got home I thru on the tunes, and went mad cleaning on the house since it got a little messy from the weekend. After that the roomies came back from dinner at Robs parents and we all relaxed to scrubs with the for the rest of the night!

How was your weekend love bugs?!