I was suppose to have lunch with Larrissa today, and catch up because its been so long. I had to unfortunately cancel, I forgot I had a date with the famjam that I just couldn't miss, so sorry Larrissa Ill def make it up to you soon xoxo
Moving on,
Sunday Amy came and picked me up in the AM and we headed right to her house. I spent little to no time inside when we got there all I wanted to do was take my boys to the park so we could do things like play outside in 20+ weather!

First stop was the splash pad park, it was still to chilly for the water so I'm assuming that's why it was still off, hopefully they open it soon, we had so much fun last year! Hudson played on the jungle gym, while Jacob showed me his new slider. Hey Jacob, when you make it in the pros as a pitcher don't forget who helped you practice, and who LOVES money you. We got pretty hungry from playing outside, so we headed to get some pizza. I was way to nice to eat inside, so we headed to the school that was just around the corner from the pizza place. Where I sat and watched my boys play some more. 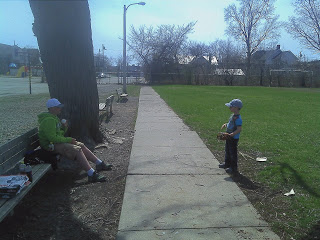 We got back to the house a few hours later, and Pock had a BBQ going for us *2 BB Q's in 1 week, I cant even hate. After our burgers, Jacob and I headed downtown to go to the movies. There was a Tom Cruise movie, and scary move 5 Jacobs 14 it was clearly a no brainer on what one he wanted to see. Lindsay Cokehan, Lohan was HORRIBLE, when I laughed at her scene it was more of a awkard chuckle, I must admit its pretty funny how she makes fun of her self. And Katt Williams, totes made the movie! I must say when snoop was walking thru the forest looking for a "few buds" of weed to steal would of been 100xs better if he was walking with Wiz Khalifa, just saying! The movie was rather on the short side, as in maybe 1 hour 15 Min's, we got out more earlier then excepted but ended up heading back early anyway since theres no arcade in the theater anymore, and I feel sorry for kids who have to live in my town and go to the theater and not get to experience the arcade. Not that it was anything exciting, but it was a time killer.