On the Monday of my holidays Q had daycare, so he was really excited to show me his teacher and classroom. When I got there I realized it was exactly where I wanted to be, In daycare. Teaching children has always been my passion seeing Q at his daycare and how much he loved it made my mind really clear on where I need to be, and what I need to be doing.
After John & I dropped off Q he had a apt in London to go to, first we met up with one of his other friends, another war vet, or crazy nut as we call em'. He seemed like a down to earth guy, someone who could be really good support system for my brother. Since I just love me some London town, I took the car for a drive while my brother was at his apt. Clearly I'm not that great of a London driver because I got lost for the 2nd time within 72 hours. At least I had my cell phone this time, however I also had johns phone so its not like having a phone at this point would of been help full. Finally he used the desk phone to call me, at that point I found the hospital, turns out I was across the st at another hospital. FML After my crying session, and johns laughing session we shopped around different stores mainly hard wear stores, but I didn't mind it had been THREE months since I saw my big bro. I could of been shoveling snow and been happy as shit.  Later that night john & I took Q & M down to the park.

Q wanted to ride his thomas train, but after about 5 mins he realize how much it sucked having "too little of legs" he chose to ride his bike instead, but not befor I snapped this cute picture up! 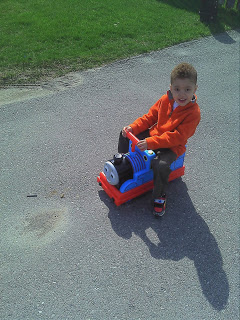 M was getting a little tired from his lack of naps. Usually I guess he has 2 power naps, and 1 rather long nap during the day. It was 5pm, and homie slept a total of 30 Min's. I ended back to the house with M, and saw this insane drive way.. 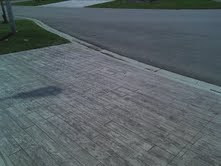 Nothing to exciting happened, oh except for SNOW. Yep mutha fuckin snow, I was not impressed. Monday was BEAUTIFUL outside, just amazing. Today we get snow? WTF mother nature, WTF. Its okay, Ill forgive you. Better be the last time you hear me ..or else.. *Total empty threat there, really what am I going to do?! LOL* We all just kinda of sat around the house most of the day. In the am Tammy got some grocery shopping done, while John work in the garage on putting shelf's together. I enjoyed playing with my boys indoors. Q sure does have a wild imagination. Even thou the weather was crappy, that doesn't stop black peeps from having a BBQ! John and I  headed to a store and picked up a new BBQ while Tammy got the steaks ready. By the time we got back it was well past 9pm, but ugh it was well worth the wait! Again, I'm a #badblogger, and took no pictures!!