After the jays game I had my brother John pick me up so I can start my holidays with him and his fam. My brother and I were always close ever since I can remember. He bought me a poster with one of his first pay cheques, a BSB poster for my birthday still one of the greatest gifts. He taught me to roller blade, ride a bike. Best off all he wasn't embarrassed by me, he took me everywhere with him even without being asked. He was the definition of a great big brother. About 8 years ago he left for a 6 month tour in Afghan, longest 6 months of my life. So believe me fellow bloggers when I say I know what its like to worry, to lose sleep, lose apittipee, get nervous when the reports say another bomb went off without saying where it went off, to sit and wait and wait and wait for that phone call so you know hes okay.
I get it.
Enough sad stuff. So anyway, it wasnt untill I moved in with him a few years ago that we became even closer. We learned so much about each other. I saw him rise and fall with trying to control PTSD, I got to see all his faults in a different light, and in many ways he taught me so much about myself. It aloud me become closer with his wife, and have an amazing bond with his oldest child.
The last time that I saw john was about 3 months ago when I helped him and Tammy pack up & load the uhal for there next adventure! To say that John and I were excited to see each other was a understanement . We went from seeing each other everyday to, well never. After the jays game he picked me up, we celebrated 420, then headed back to his house. Traffic was beyond crazy so by the time we got back to his house it was pretty late, so I got a quick tour of the new digs and we just relaxed and hung out for the rest of the day.

When I woke up, I found Q quite excited to see " auntie Leen" apparently I got a new name while I was away? I spent a good part of the morning getting hugs and kisses from

Q..when did he get so tall? 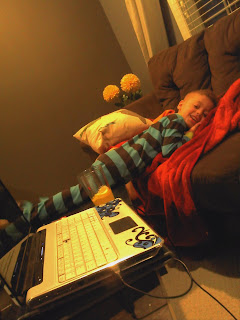 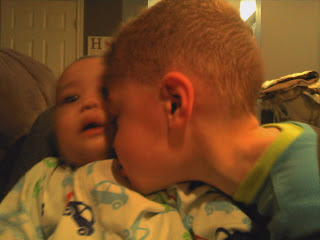 Since it was sunday we headed to church. I dont remeber the last time I attended chruch, mainly
because I have no one to go with, I know I could go by myself and meet new people but thats just not how I do, I dont like to do anything alone. My friends are usually way to hungover, or simply just not interested and would never ever think about going to church with me. The pastor spoke about how a man is a man, and the way's he should behave, and that a women is a women and how she should behave he refered to how a womens role is to be the rock for her husband, be faithfull to her husband, how a man needs to treat his queen, and how he needs to raise his children in the right way. He really stressed on a MAN & WOMEN relationships. It was interesting that this was being preeched to me, a huge GLBT supportor. Non the less, I could appricate for the most part what he was saying.
My brother works in the sound room at church(when he was in the militarty electirical enengering was his back ground so he was glad to be able to assit the guys, ) which aloud Q to discover his hidden talent, and I was glad to be able to capture moments like this. He was doing so good, cue the proud auntie music. But for real, he was holding the sticks perfect, and thinking so hard about his nxt move, and the kid kept up a good beat! 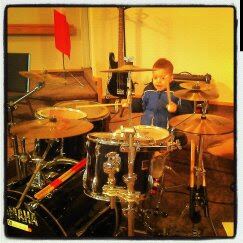 The choir sounded great too during church, shout out to the homie playing bass! YOU ROCKED! My modest bro try to tell me that the choir is awesome with or without his help, my bros pretty awsome. So I doubt it.