Back to the story ;
12 reasons gays shouldn’t be allowed to marry

This list uses sarcasm to show the ignorance of arguments against same-sex marriage. Please read it with a sense of humor. Just for the record, I am not gay but support marriage equality for all.

1.Being gay is not natural. Real Americans always reject unnatural things like eyeglasses, polyester, and air conditioning.
- Because no one has even boughten boobs & hair either
2.Gay marriage will encourage people to be gay, in the same way that hanging around tall people will make you tall.
-Because I cant tell you all the box ive been eatting latly and all the crazy lesbo dates ive been on since hanging out with Tony

3.Legalizing gay marriage will open the door to all kinds of crazy behavior. People may even wish to marry their pets, because a dog has legal standing and can sign a marriage contract.
-Because nothing says I love you by really doing it doggie

4.Straight marriage has been around a long time and hasn’t changed at all like many of the principles on which this great country was founded; women are still property, blacks can’t marry whites, and divorce is still illegal.
- Because eatting an apple a day keeps the doctor away

5.Straight marriage will be less meaningful if gay marriage were allowed. The sanctity of unions like Britney Spears’ 55-hour just-for-fun marriage would be destroyed.
- Because nothin screams I really love you like running for the hills, im sure thats what gays are waiting for a chance to make everything they want come true, then decided they change there mind


6.The only valid marriages are those which produce children. Gay couples, infertile couples, and old people shouldn’t be allowed to marry because our orphanages aren’t full yet and the world needs more children.
- Because you know this makes sence people think about it, lets not be fair to everyone god wouldnt want that 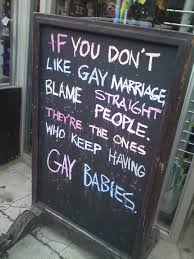 - Because all the gay kids I know have gay parents too..


8.Gay marriage is not supported by religion. In a theocracy like ours, the values of one religion are imposed on the entire country. That’s why we have only one religion in America.

9.Children can never succeed without a male and a female role model at home. That’s why we as a society expressly forbid single parents to raise children.
- Because NOONE ever made it anywhere without 2 proper role models

10.Gay marriage will change the foundation of society. We could never adapt to new social norms, just like we haven’t adapted to things like cars or longer life spans.
- Dont forget about the internet, EWW

11.Civil unions (providing most of the same benefits as marriage with a different name) are better, because a “separate but equal” institution is always constitutional. Separate schools for African-Americans worked just as well as separate marriages for gays and lesbians will.
- Because you know good ol' rosa parks thought the same way

12.Gay marriage should be decided by people, not the courts, because the majority-elected legislatures, not courts, have historically protected the rights of the minorities.
- Yeah totally crazy thought! 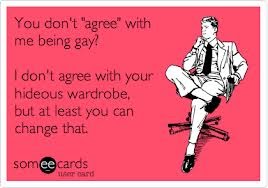 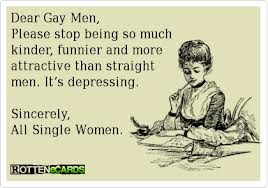