Friday,
After work Lisa took me to get my nails done for her wedding, which was the next day. We finished some more running around. Then we met at the church for the rehearsal, after Bryan's (lisas fiance) parents invited everyone back to there place for dinner. After dinner we headed back to lisas house, the other bridemaids and I helped her do some more wedding stuff for the hall then headed to bed.

Saturday,
We woke up bright and early as in 5am booo. Once we finally got organized and out of the house our first stop was Lisa's parents house. We dropped off the stuff we would need to get ready, and then headed over to the hall to set up. After we were done at the hall we headed to Lisas parents to get ready. Make up & hair came to us so that was nice and convenient. After that it was show time! we headed over to the church, after the amazing ceremony *where I balled my eyes out like a baby* we headed to get pictures done at Bryans grandparents house. 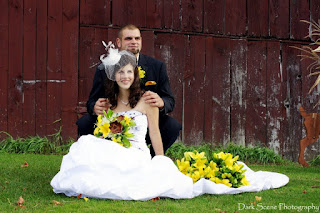 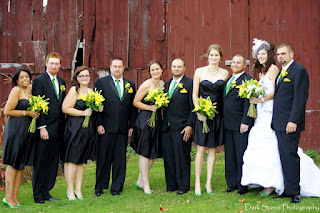 *Incase your wondering why I look so stiff IT.WAS.FREEZING!!*

After pictures we headed to the hall to get shit started! Lisa played her own spin of "Dont forget the lyrics" as her kissing game. If you wanted Bryan and Lisa to kiss you had to pick a catorgery for a music genre, and give it to the DJ. He will let you pick 1 of 2 songs and you have to finish the line, if you get it right Bry and Lisa kiss, if not the bride/groom had to kiss a wedding party member. I ended up leaving the party early because I had to work sunday. Since robs birthday waz other day he had his party saturday night so after I left the wedding I stopped in there for a bit then headed home.

Sunday,
After work Audri picked me up since her birthday is monday *today actually* we were going to see the male strippers she was so sick she wasnt in tbe mood to go out party. So I stayed in for the night watching advengers with thr farmer and roomies. After the movie I headed for bed. And that concludes my weekend..
How was your weekend?!
Posted by itsmekt at 10/08/2012 11:42:00 AM