I love you, man

Normally I dont post personal info on my freinds, however today im happier then a pig in shit, and couldnt be more proud to say that today one of my best friends sent me this!

*Ry's name is saved under Vanilla because, we were ALWAYS together, like chocholate and vanilla * 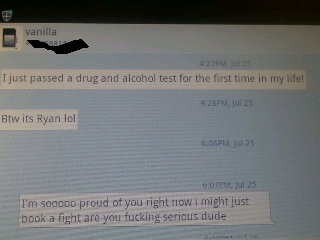 Ry & I met back in 2002 I believe he was the badass kid, and I was in love. We spent every waking minute of my life together. Doing whatever Ry wanted to do, I hung onto his everyword, it was the most unhealthy relationship. I drank, I stole cigarette, I smoked weed. It was so unlike me, but I needed Ry's attention so bad that none of that mattered to me I didnt even think I just did things. He has that control on people he just makes them do things. Ill remember this next part FOREVER and a day, I was at my dads house ( Part of my wknd visitations) and when I came home Ry wasnt there, he was always there. It turns out just like that he moved away. Turns out that he got busted for stealing from his uncles house, and got kicked out and moved back to his home town. 3 hours away.

Insert sappy song hear, like Deana Carter who I like to think wrote "Strawberry Wine" for us ...
"A few cards and letters and one long distance call We drifted away like the leaves in the fall"

So Ry went home, and I spent the next 8 years wondering whatever happen to the guy. After a few conversations and 1 letter, never heard from him again. Well wouldn't know, 2 years ago in March he called his uncle because he heard he had his own construction company and was looking for work. That uncle was Pock, My Amys now husband. So I have to live under the same rough with the guy who stole my heart 8 years ago, when I was wittle teenage girl it means that I never really got over that first "Love" if you will...

When Ry moved in with me my world stopped again, for about a week. Then I quickly got over it, and told him to STFU, and hes been my BFF since. Just like before we spent every minute together this time it was different, not sure if it was because I wasn't so obsessed with him anymore, or if its because I wasn't a 15 yr old girl anymore but his opinion just didn't matter, at least I thought it didn't matter. A lot of stupid shit later, a few drug busts, a few drunk/driving nights, a few stealing and vandalizing nights, a few WTF did we do to this shit last night nights had caught up to us however it took 2 years.

2 long years, 2 years of us fighting, and making up. Him getting in shit, and me covering for him. Me going along with whatever he wanted me to do, no matter what my friends and family though. Until enough was enough, I wasn't about to follow him down his next path in life, Oxycontins. Turns out that while Ry was living back in his home town, he developed a addiction to oxys, when he moved back here it was short end supply but I still remember him being the Ry that I fell in love with not the monster I was about to meet.

When Ry is coming down, or doesn't know where his next fix is coming from he is the worst person. He'll lie cheat steal, shit I'm pretty sure he would of murdered someone to find pills. It ruined our relationship, just ruined it. It was over, done. I could not handle it anymore, he yelled at me and argued with me about anything. He would just pick fights for the sake of picking fights. He would lie to me and tell me someone said something just to see my reaction. It was pathetic, he was pathetic. However when Ry wasn't high he was the old Ry that I loved, and who made me fell loved. That I cared so much about, it made me almost forget about all the shit he tried to pull.

Back in Oct, things went way to far. I couldn't do it anymore and I did something I never thought I would be able to do, I left. I packed my shit, and I moved out. I told Ryan to never speak to me again, to lose my number, forget we met ect ect. Between Ry and I moving into my brothers, and me moving out he developed a coke problem as well. It got so bad that his friends were telling me that I need to get Ry help, and they were druggies too! Ry brought my brother into this mess, at that point I was also forced to end my relationship with my brother. He was behaving just like Ry.

In Dec, Ry fucked up large, owed to many ppl money, and god only knows what else hes done. He sent me a txt asking if he could see me before he left for AB. WAIT WHAT ALBERTA! I didn't want him to leave. I hadn't spoken to him in 2 months, and I had no plans of speaking to him in the future, however I just couldn't let him go. Chalk it up to he was still my first love I suppose. Ry came over to my house, we didn't talk about anything. 'Cause it didn't matter. I felt it, I knew he was sorry I knew that wasn't him, I knew that leaving this shit whole and going to Alberta with his parents was something that Ry always talked about not wanting to do. Since he was willing to go, I knew that he needed my support after he left I could either turn the other cheek and pretend he never came back into my life. Or I could be his friend, the only one hes got at this point, and support him.

And I did, and am I ever glad that I did.