Welcome to my weekend recap, with Sami's Shenanigans 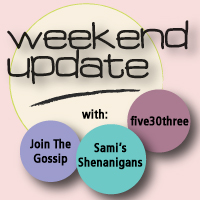 Friday,
Friday I spent all day working on my blog, and getting it set back up the way I liked it. I STILL cant believe I did that, RETARDED right?! Friday night after work I went home, relaxed for a while then I headed over to My Amy's for the night, since I had Hudson Saturday morning.

Saturday,
Hudson & I cuddled for a little while and I washed my laundry. When we were done we got ready for the splash park. I really thought he'd be a little more into it, but the excitement was over within 15 mins of getting there. After that the played on this climbing toy for awhile, then the swings. Then back to the splash park, where little cant-make-up-my-mind-where-i-wanna-go Hudson decided he was hungry. Since I wasn't about to spend $5 on a hot-dog I knew he wasn't going to end up actually eating I told him "the seagulls will steal Ur hot-dog, lets eat somewhere else" to be fair, there were lots of seagulls, and I think the kid totally bought it! *scores* After that we ended up going to a grill up the street where I got fries, a hot dog, and a drink for $4.50, take that chip truck at the park HAHA *VICTORY IS MINE* Geoff came by and picked up Hudson early to go to a party his boss was having. Audri came back shortly after and picked me up for big music fest but i guess she forgot shes a moron who said "I'm not going to big music fest, its going to be lame" there for I had no extra cash to go to BMF, not impressed. I spend the next couple house at my place relaxing well the roomie was off to a wedding. It was nice to have some alone time, even if it did only mean laying on the couch watching scrubs, my new TV addiction. Saturday night I meet back up with Audri, and we ended up partying at a local bar for the rest on the night, where she decided I needed to play "catch up" by drinking doubles. Yeah, it was that kinda of night

Sunday,
I thought I was dying, my head hurt so bad. However Audri insisted on spending the day outside, in the sun. At least it was in the shade, def not how I pictured my Sunday funday. All in all it was a good weekend. Cant wait for next weekend. Hopefully Ill get the bridesmaids dresses paid off, and Tabby is having a Scenty Party. Which reminds me, my holder is even MORE broken and I still haven't bought glue for it!
Posted by itsmekt at 6/18/2012 05:36:00 PM